Gitlab provides services that allow hosting your project on a remote repository and provides additional features that help in continuous integration and deployment. Such as code sharing, code review, and bug tracking.

In Git there is the notion of a "Master" code base which contains the work of all contributing members in a project.

There are two basic workflows that you may follow when using Git for version control.

This section of the guide will walk you through these two workflow strategies.

1. Working off the "Master" Branch

Working directly off the "Master" branch can be advantageous to smaller groups who rarely (if ever) work on the same portions of the code at a time.

The basic workflow for this method is as follows:

The second workflow takes advantage of the branching system in git. To protect your Master branch from code that may break your build or introduce bugs we can create what is called a "feature branch." These branches contain your development code and isolate it from the main code until you are ready to merge them together.

The workflow is as follows:

Here is the general workflow in git commands:

When you are ready to merge your branch back into the source branch there are two routes you may take:

To merge your feature branch into the source uses the following workflow:

The git commands for this workflow looks like this:

When working in a team it will be inevitable that the same file will be touched by multiple developers. If multiple make changes in the same part of the file, then it will result in a merge conflict when attempting to merge the files together. These conflicts can be resolved in your IDE directly or in any text editor.

What is Git Merge Conflict?

A merge conflict is an event that takes place when Git is unable to automatically resolve differences in code between two commits. Git can merge the changes automatically only if the commits are on different lines or branches. 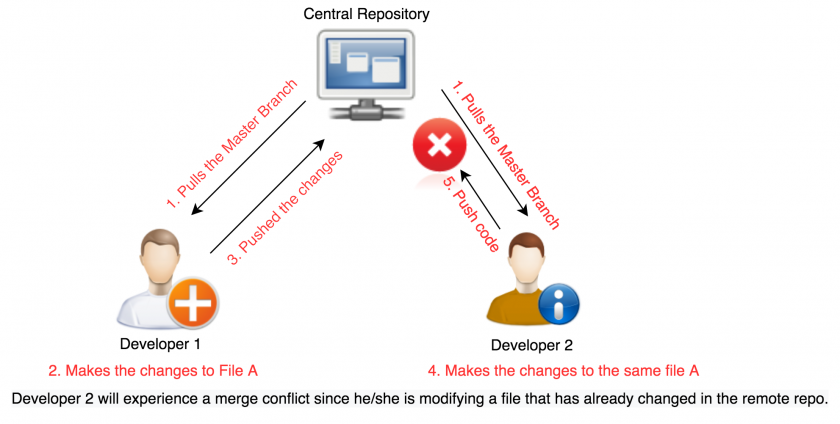 The git commands for this workflow looks like this: