LAB: CAN bus with DBC

Objective of this lab is to: 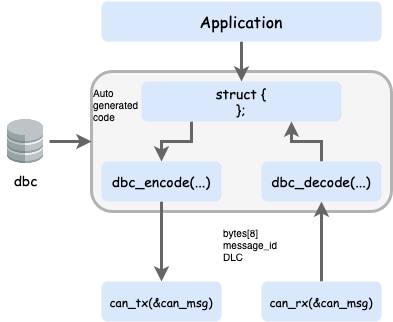 In this part, we will give meaning to various different bits and bytes that will be sent over the CAN bus. We are giving you a reference of MOTOR_CMD message, and in the sample dbc file located in your project folder, there is also project.dbc. These are reference points only, and you should be creating your own DBC message and not use these references word by word.

The snippet below dictates the following and you can read about DBC files in detail here. Documentation about the code generation can be referenced here.

Use the references and create your own message composed of "signals" that you wish to send from one microcontroller to another. We recommend that you create signals such as acceleration sensor value, or a button press value that you will send from one board to another.

In this part, we will auto-generate C code based on the DBC file. The significance is that we want to minimize code development that is responsible to send correct data set on the CAN bus. This not only removes the tedious work and allows the developers to focus on the CAN application, but also minimizes common bugs related to transmission of data on the CAN bus.

Please read the README.md file located in your project directory (or click here) to better understand the code generation aspect. Stop here, and spend 1-2 hours to understand the generated code that was created from your dbc file. We really mean it... spend time understanding the code because on the exams you will be asked to write this "encode" and "decode" code by yourself. 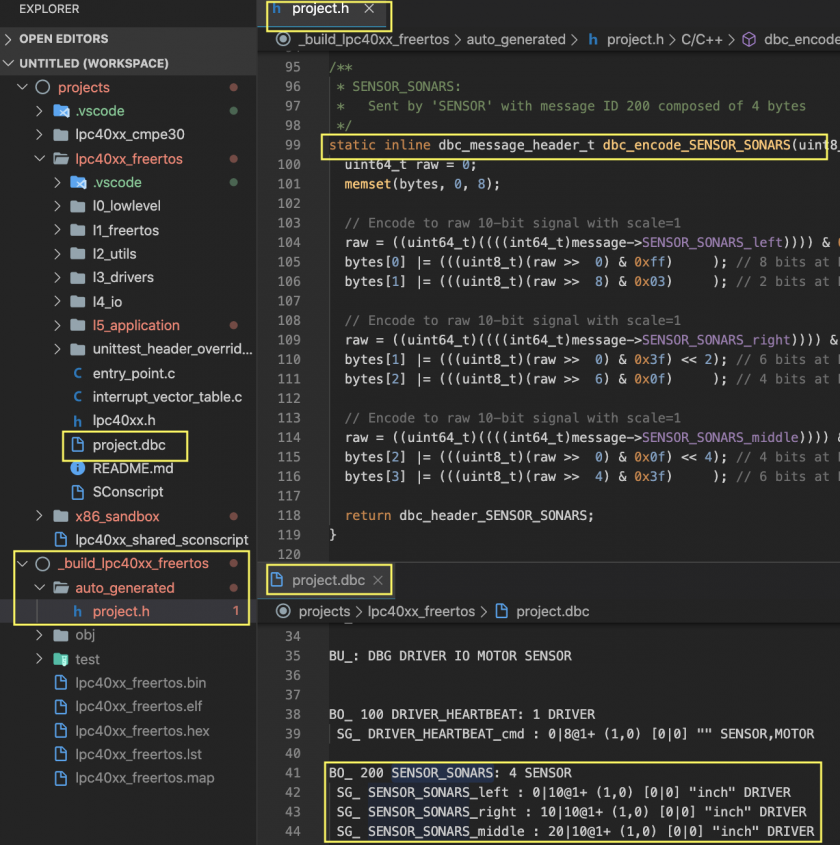 In this part, we will provide instances of two key data types:

Well of course, we have to understand what is "MIA". MIA is Missing-In-Action, and the idea is that when an expected periodic message has not arrived, we replace it with safe values. For instance, when a temperature reading has not arrived, we can set the ambient temperature as a replacement value. This way, we do not have to repeatedly check if we can trust data values. In other words, if your RC car is controlling motors, we want to avoid this type of code:

The code snippet above demonstrates that our code will be cluttered if we have to check for its validity everywhere. Instead, when periodic data goes missing, we just replace with zero, and therefore we can just retain this logic without checking for data validity upon each access of CAN network data.

Take a note of the following auto-generated code which is asking for extern definitions from you:

You will have to define the extern data values in a code module such as can_mia_configurations.c You can choose your own MIA replacement values, but if you leave it un-initialized they may be assumed as zero due to ANSI C standards.

After defining the data above in a file such as can_mia_configurations.c, invoke the MIA management in one of your periodic functions like so:

Encoding is used when you wish to transmit a data structure to the CAN bus. Obviously, this should only be used for a message that you are a transmitter of. Remember that no two nodes shall transmit the same message on a CAN bus.

On the receiving side, you should empty out all CAN frames received from the CAN driver, and then handle it in sort of a brute force approach.

And, don't forget MIA management of the message as mentioned in the section above.

Summary of your overall tasks:

Follow this link and setup your Bus Master, and follow the steps to install, configure, and explore the program.