To learn about the use of ADCs, their different types, their related parameters, and how to set up an ADC driver for the LPC40xx.

What does ADC accomplish?

An Analog to Digital Converter is needed whenever one needs to interface a digital system with an analog device. For example, if one needs to read the voltage across a resistor, and use the value within an algorithm running on the SJOne board, an ADC circuit is needed to convert the analog voltage to a discrete digital value. Luckily, the LPC40xx, like most microcontrollers, includes an ADC circuit that we can utilize. 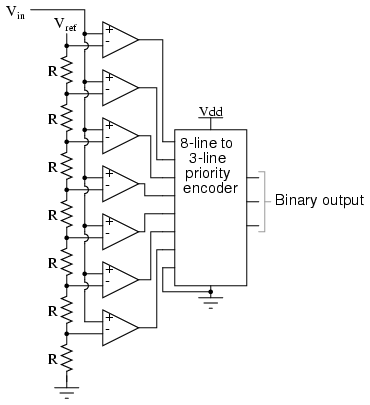 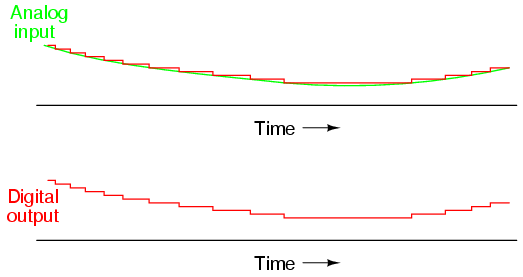 This type of ADC utilizes an up counter, a comparator, a DAC, and a register. DACs (Digital Analog Converters), as their name suggests, perform the inverse operation of an ADC, i.e. They convert a binary input into an analog voltage output. The up counter starts at zero and counts up synchronously. The output of the counter is wired to the DAC. The analog output of the DAC is compared to the analog input signal. As long as the comparator indicates that the input voltage is larger than the DAC's value, the counter continues to increment. Eventually, the DAC's output will exceed the input voltage, and the comparator will activate the counter's reset signal as well as the register's load signal. The register's output represents the binary value of the input analog signal.

Note that because the counter starts from zero with every sample, the time it takes the circuit to produce the digital output is inconsistent. 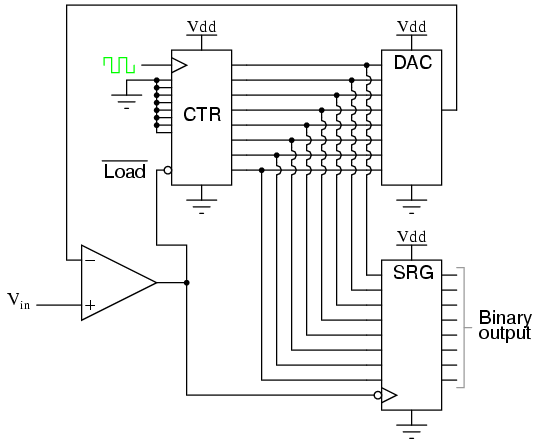 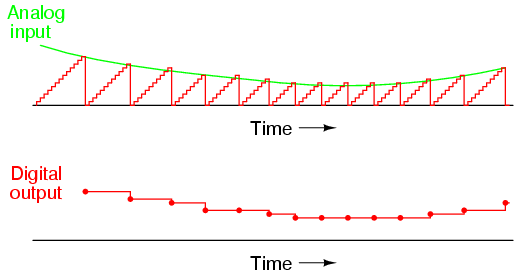 This type of ADC is more popular than flash and digital ramp due to its consistent timing and relatively scalable design. 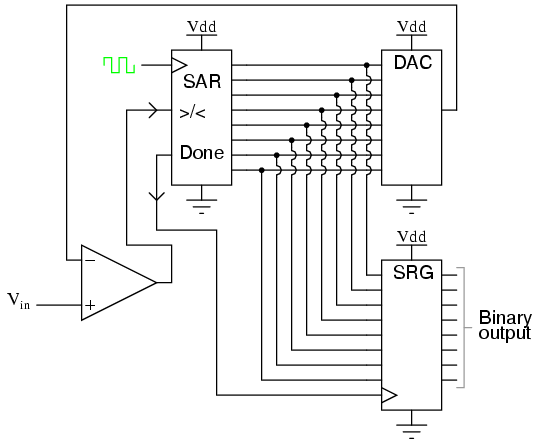 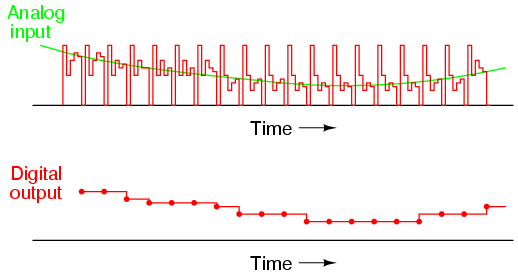 A Tracking ADC works similarly to the Digital Ramp ADC, except instead of an up counter, it utilizes an up-down counter. The output of the comparator determines whether the counter increments or decrements. It doesn't use a register to hold the processed value since it's constantly tracing the input value.

Note that this type of ADC does not respond well to large changes of the input analog signal. Additionally, it suffers from constantly going over and under the input value. This is known as bit bobble. 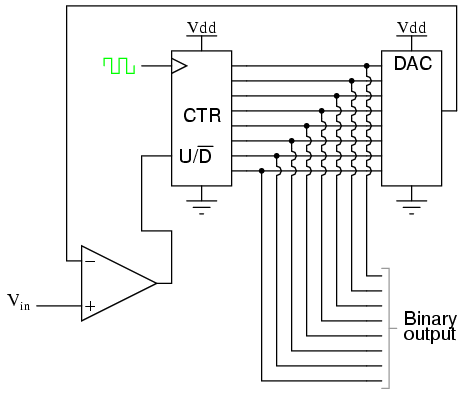 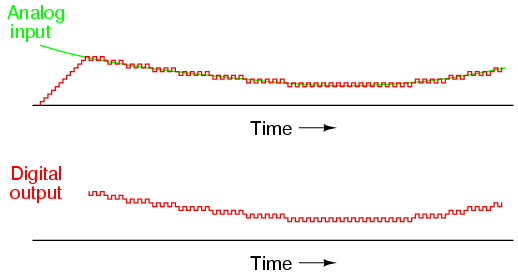 Besides Flash ADC, all previous ADC circuits rely on using DACs to convert an estimated digital value to an analog one and compare it to the input signal. There are other types of ADC technologies that do not use DACs. They rely on the known time it takes an RC circuit to discharge to match the input analog signal. Single Slope, Dual Slope, and Delta-Sigma ADCs implement this concept.

This is a measurement of how quickly an ADC's output is able to respond to a sudden change in input. For example, flash and successive approximation ADCs are able to adjust relatively quickly to input changes while tracking ADC struggles with large input changes.

This is a measurement of the range of voltages that an ADC circuit is able to capture and output. For example, the LPC40xx has a range of 0V to 3.3V. Other ADCs may have bigger ranges or even variable ranges that a user can select, such as this device: https://www.mouser.com/ds/2/609/AD7327-EP-916882.pdf

This is a measurement of the systematic error of any given ADC circuit. This is measured by comparing the actual input signal to its digital output equivalent. Note that, this error measurement is only valid within the range of the ADC in question. 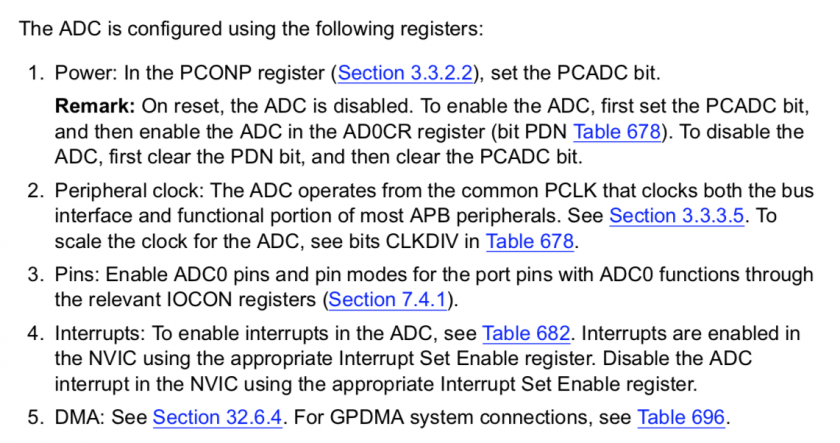 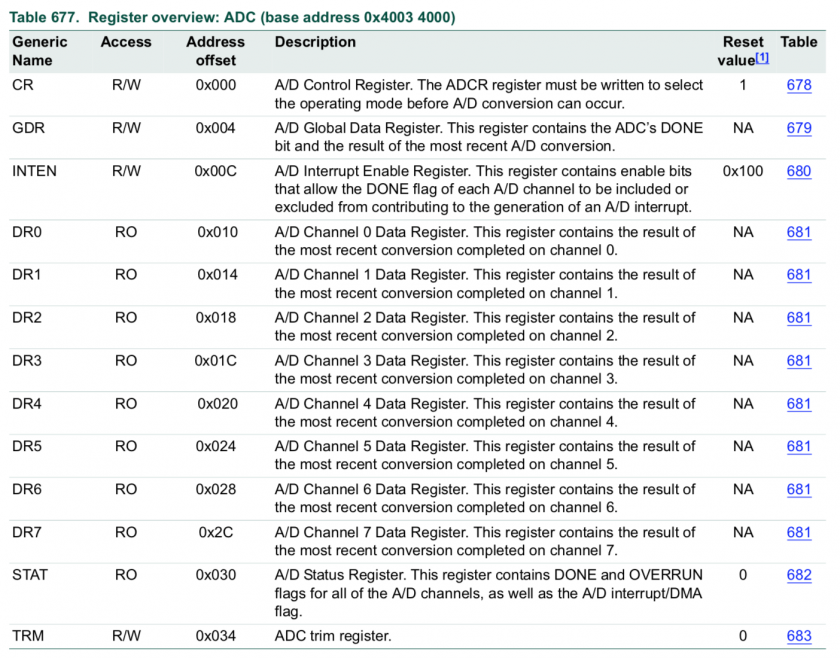