You will be using a "file system" API to read (or write) a file. This is a third-party library and is not part of the standard C library, and it is connected to the SD card using the SPI bus.

Please read this page for API details; here is the overall data flow which allows you to use high-level API to read and write a file.

What you are designing is a software check-in system and thus emulating a "Software Watchdog". 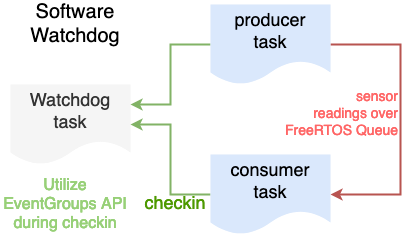 What you created is a "software watchdog". This means that in an event when a task is stuck, or a task is frozen, you can save relevant information such that you can debug at a later time.

What to turn in

Please use TraceAlyzer to open this trace and inspect what is going on. The company offers "Academic License" to view the attached file (click on the link above).