The number system holds significance in terms of writing and expressing code to a computer, typically in a programming language. Note that we (as humans) do not use hex or binary numbers that much outside of the computer science domain. For example, we don't walk into a supermarket and read prices in binary such as $0x10 :)

Often times in programming, we need to express numbers more quickly, and we might say int x = 0x10000000 to quickly indicate 32-bit value with bit31 set to 1. Notation x = 0x10000000 is easier than writing x = 268435456 which would be more cryptic for a programmer to realize the significance of because the reader of the programming code will not be able to quickly realize that it is specifically setting bit31 to value of 1.

Typical numbers we are familiar with are decimals which are technically "base 10" numbers. So an ordinary number that we may be aware of such as 123 can be written as 12310.

The number 123 could also be written as:

One digit of a hex number can count from 0-15, but since we have to represent the hex number using a single character, the numbers 0-9 are usual numbers, and the numbers 10-15 are represented by A, B, C, D, E, F

For example, hex 0x12 can be written as:

As another example, hex 0xC5 can be written as:

Decimal (base 10) numbers can be converted in a couple of different ways as described here. One of the methods is to continue dividing by 2 and note down the remainder as described in the image below. The article above also describes a potentially faster method of conversion so be sure to read it! 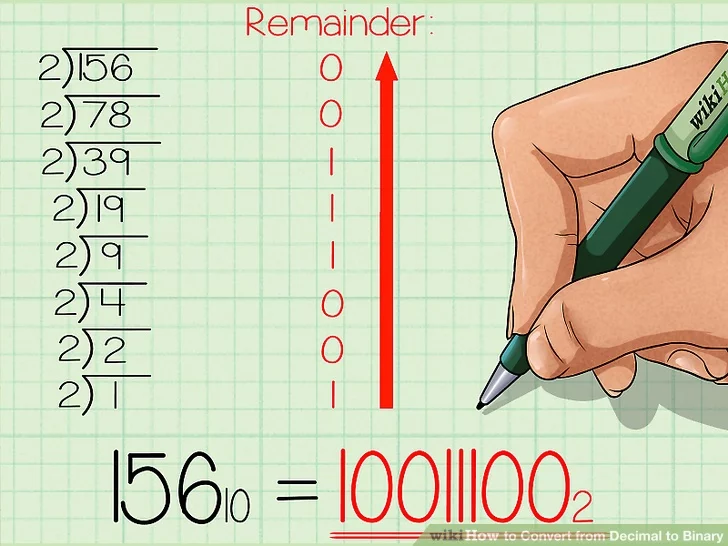 Decimal to hex is similar to Decimal to Binary except that we are dealing with powers of 16 rather than powers of 2.

My favorite method of conversion from decimal to hex is to first convert the number to binary. For example, let's start with a large number such as 23912. We can use the Decimal to Binary method to convert this first to binary:

The following table can be utilized to convert hex to binary very instantly:

Let's take another example to convert 0x1BF to binary; simply break it down by "nibbles":

For Hex to Binary, we used a lookup table as a "cheat code" :). For Hex to decimal, it would be easier to re-write the numbers as powers of 16. For example, to convert 0x1BF to decimal, we can break it down to: