To be able to General Purpose Input Output (GPIO), to generate digital output signals, and to read input signals. Digital outputs can be used as control signals to other hardware, to transmit information, to signal another computer/controller, to activate a switch or, with sufficient current, to turn on or off LEDs, or to make a buzzer sound.

Below will be a discussion on using GPIO to drive an LED.

Although the interface may seem simple, you do need to consider hardware design and know some of the fundamentals of electricity. There are a couple of goals for us:

You should know the following: 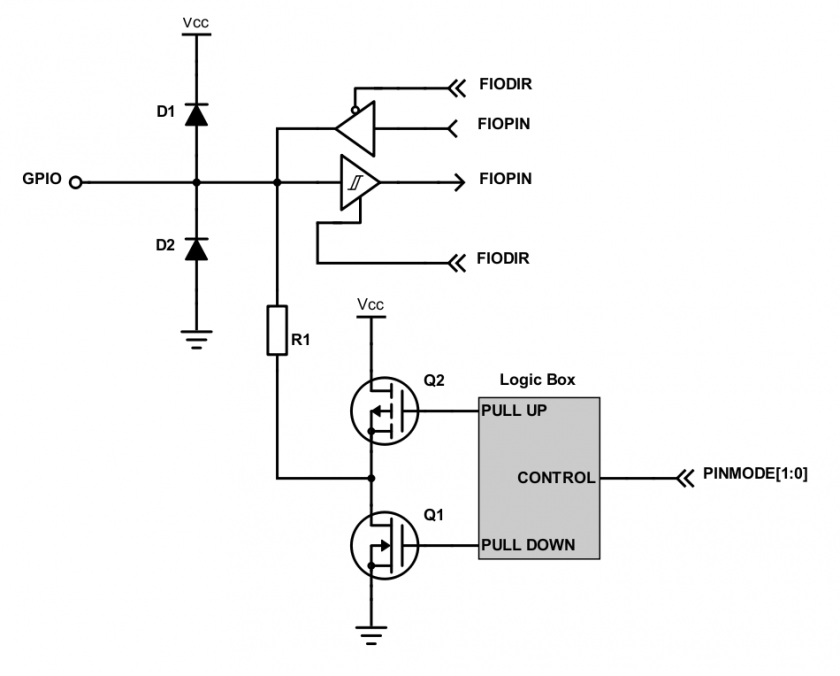 Figure 1. Internal Design of a GPIO

GPIO stands for "General Purpose Input Output". Each pin can at least be used as an output or input. In an output  configuration, the pin voltage is either 0v or 3.3v. In input mode, we can read whether the voltage is 0v or 3.3v.

You can locate a GPIO that you wish to use for a switch or an LED by first starting with the schematic of the board. The schematic will show which pins are "available" because some of the microcontroller pins may be used internally by your development board. After you locate a free pin, such as P2.0, then you can look-up the microcontroller user manual to locate the memory that you can manipulate.

The hardware registers map to physical pins. If we want to attach our switch and the LED to our microcontroller's PORT0, then reference the relevant registers and their functionality.

Note that in the LPC17xx, the registers had the words FIO preceding the LPC_GPIO data structure members. In the LPC40xx, the word FIO has been dropped. FIO was a bit historic and it stood for "Fast Input Output", but in the LPC40xx, this historic term was deprecated.

We will interface our switch to PORT0.2, or port zero's 3rd pin (counting from 0).

Note that the "inline" resistor is used such that if your GPIO is misconfigured as an OUTPUT pin, hardware damage will not occur from badly written software. 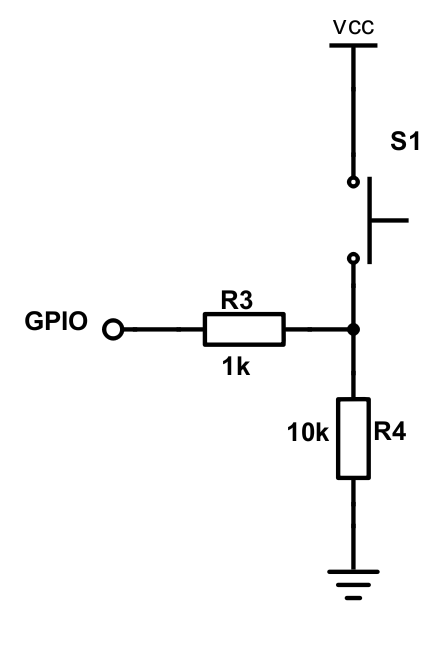 Given below are two configurations of an LED. Usually, the "sink" current is higher than "source", hence the active-low configuration is used more often.