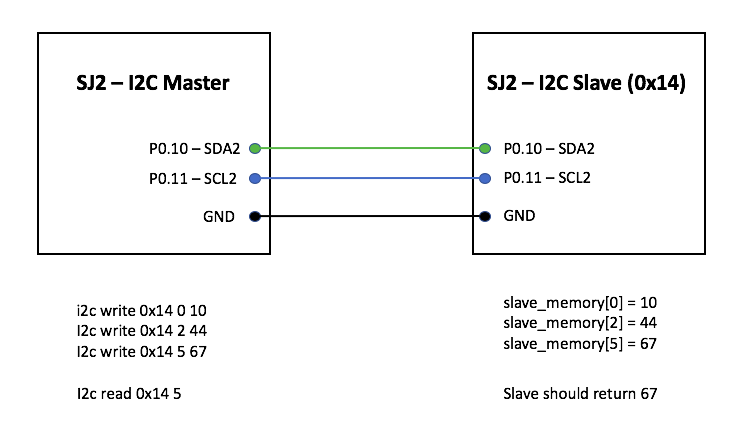 Unless you have read the material above minimum of 5-10 times, there is no point moving forward into this lab. It is extremely important that you are familiar with the I2C bus before you dive into this lab. You should then understand the existing I2C driver that you will be "extending" to support slave operation. Start with the header file interface, and correlate that to the other reading material mentioned above.

Next step is to get familiar with the I2C CLI command and the existing I2C master driver, which allows you to read and write an I2C Slave devices' memory.

Your objective is to act like an I2C slave device. Just like the acceleration sensor, you will act like a slave device with your own memory locations that a Master device can read or write. The first step in doing so is to draw your I2C Slave driver state machine that you will implement in your code.

Build the following table for your I2C Slave states:

The key to making the table above is:

In this step, we will configure your Slave board to respond to a particular I2C bus address. We will add minimal code necessary to be able to be recognized by another master.

Believe it or not, you only have to write a single function to be recognized as a slave on the I2C bus.  Since the I2C Master driver is already initialized, you already have the setup for the Pin FUNC, and the I2C clock, so merely setting up the slave address recognition is needed. Locate the I2C registers and configure your Slave Address registers.

Pause here, and attempt to reboot the I2C Master board, and it should recognize your Slave address on startup. Do not proceed further until you can confirm that your slave address setup is working.

Notice that on the I2C slave board, it will print an entry to a new (un-handled) state each time the master board reboots and tries to "discover" the slave devices.

In this step, you will do the following:

The functions you added above should be called by your i2c.c state machine handler when the right state has been encountered. This should directly be related to your Part 2.

Inside the interrupt, you may have to save data variables as the interrupt cycles through the I2C states. The best way to handle this is to add more data members to typedef i2c_s; after which you can access members of this struct inside the I2C ISR.

In this step, we provide the skeleton code that you need to integrate in your main.c at your Slave board.